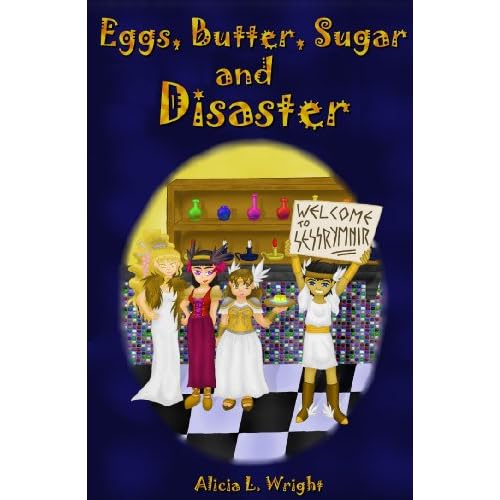 From Amazon: “An entertaining comic fantasy in which Seralina accidentally becomes the Goddess of Puddings, meets dwarves and valkyries and sets about trying to help other Gods and Goddesses as well as figure out what she will do for eternity. Unfortunately things go a bit wrong …Recipe for Ragnarok First take a generous helping of Seralina, whisk up into the Norse pantheon, add dwarves to taste and sprinkle with a dash of immortality. Leave to mature for just the right amount of time. Now settle back and enjoy a fun trip through numerous afterlives and see if Seralina can stop Ragnarok.”

Seralina, a fairly average graphic design student, ignores the warning label on a can of Idunn’s Finest and accidentally becomes a goddess. Unfortunately, there aren’t a whole lot of jobs available for goddesses, so she’s stuck as a valkyrie – a celestial waitress-cum-chauffeur – until she can find something better. She makes friends with Hermes (who likes to hang out in the Norse afterlife despite having a perfectly good realm of his own), works at Freya’s Ginza Bar (Yes.), mistakenly labels herself the Goddess of Puddings (which sticks), builds a cat-dragon (who isn’t particularly grateful), and may or may not be responsible for the second Ragnarok.

Eggs, Butter, Sugar and Disaster reads like a Young Adult mashup of PG Wodeouse, Terry Pratchett, and JK Rowling. Wright has constructed a brilliantly humorous world of selectively-modernized mythology in which there are no longer enough warriors to fill up Valhalla, gods advertize, dwarves are contractors, and deities carry credit cards. It’s all terribly silly, but the really fantastic part is that it all makes perfect sense.

Wright’s cast of characters starts off strong and only gets better. We are introduced to Seralina, the newbie part-time valkyrie and Goddess of Puddings, whose good intentions don’t always yield ideal results. Hermes, the divine mailman, wants to start his own logistics service but isn’t quite sure where to start. Freya, goddess of love and war, is tired of all the drunks wandering around Asgard and wants to inject some class into her establishment – with a touch of Japanese flair. Even the secondary characters are fully-fleshed and endearing (Heimdall with his gold teeth and his puppy-dog demeanor; jolly uncle Osiris, inexplicably green and in need of a vacation; the snarky, snobbish Domestic Goddess in her frilly apron).

Seralina herself is not the standard heroine. She is not seeking love or destiny. She isn’t fated for something special. Like the rest of us, she makes mistakes and just has to plod through whatever life throws at her, doing the best she can with what she’s got. For a Goddess of Puddings, she’s pretty awesome.

The humour is the best bit. It’s subtle and relies largely on wordplay, which is my favourite sort. Mythology, religion, and the human condition provide much of Wright’s material, interspersed with just the right dosage of goofy puns.

There’s not much I can really call “bad” about E,B,S&D. The plot was a little slow in a couple of places, and I did notice some tense scenes where the extended dialogue was a little improbable. There were a few typos – missing periods, comma splices, and the like – but infrequent enough to be overlooked.

My only real complain is that Seralina’s pudding cult – which is given prominent mention at the very top of the first page – is sort of glossed over. I would have liked to see a lot more of them.

It’s not my usual genre, but I loved it. The characters are adorable, the plot a hoot and a half, the ending satisfying. I’d read a sequel.